Last Friday I delivered the workshop Don’t limit yourself, Kanban and beyond at the Agile Brazil 2011 conference.

The workshop was composed of two parts: a presentation, and an activity.

At the presentation time, I introduced Kanban, and talked about the reasoning behind the Kanban WIP limits, and the reason I propose a more flexible and effective control: the target-variance score. My hypothesis was that a card wall following target-variance score would have better results than a typical Kanban card wall, and I decided to give it a try at the Agile Brazil conference (it was the first time I did run the activity). The activity results did help me validate the hypothesis! I will repeat this and similar activity, and will keep on sharing the results (future conferences, work sessions, and blog posts).

Below are the presentation slides:

The activity was the simulation of work moving through the card wall (visual representation for the same workflow) for 4 different control mechanisms:

B – Kanban limits, without pairing (unless the WIP reaches the limit)

D – using the target-variance score (instead of limits)

Four decks of cards exactly equal were distributed to the teams (A to D) which had the exactly same configuration: 1 BA, 5 Devs and 2 Testers. The cards (Stories) had to be played in the sequential order (1, 2, 3…20).

Below is one team’s deck of cards. 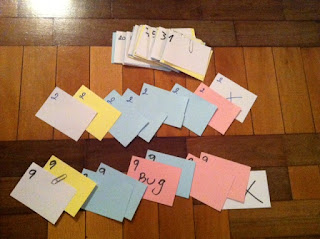 While the time went by (myself screaming: the day started, it is lunch time, it is afternoon working hours, and the day is over), the work was moving on the workflow (the card wall). Each team work dynamics (who helps who, and when) was decided according to each team control (no control for team A, limits for teams B and C, and the proposed target-variance for team D). The teams were taking pictures and collecting data for a Cumulative Flow Diagram (on an excel spreadsheet) at the beginning of each day.

Here is a photo taken by team B: 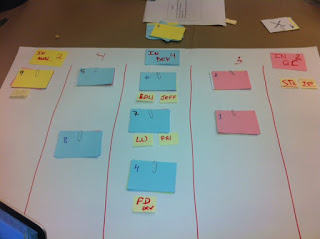 We were able to finish the activity, but unfortunately, we did run short of time and could not analyze the results. I did promise this blog post for the attendees to share a few notes, photos and the Cumulative Flow diagram of each team.

At the end of the activity, I had the following data points:

On subsequent blog entries, I will share the feedback from the session (thanks!), upload activity photos, and the Cumulative Flow Diagram created by each team. If you were at the session and have either photos or the excel file, please send it over.

Here is the feedback I collected from this workshop.

Last Friday I delivered the workshop Don’t limit yourself, Kanban and beyond at the Agile Brazil 2011 conference. The...