The definition of Sequential as per the new Oxford American dictionary:

Forming or following in a logical order or sequence: series of sequential steps.

The figure below shows a simple sequence of five steps.

Typically a software project goes through the following steps sequentially: analysis, design, coding, testing, and deploying. The figure below depicts these software development stages through its typical sequential order. In this figure, the first letter is used to identify each development stage: Analysis, Design, Coding, Testing, and Ready to go (deploy). 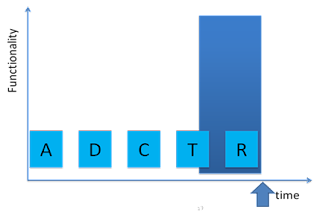 For Agile software development the small pieces of requirements are constantly and consecutively moving through each development stage. And each small piece of the overall requirements spends a short amount of time on each stage; somewhere on the order of hours or days. For example, on Patrick’s last Agile project, a small requirement (the team was using User Stories as per Mike Cohn’s User stories applied book would be in analysis for one or two days. Next the user story would be tasked by the developers in an hour or so; while tasking they would make some small design decisions. Once tasked, the user story would move to the coding stage for typically two days, with another day for testing.
In Agile software development, the system is incrementally made available. The figure below represents the small pieces of requirements, and the development stages in the graph of functionality versus time. 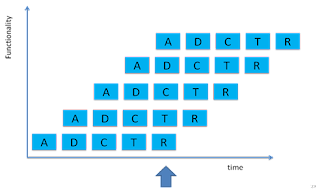 This figure depicts the nature of Agile concurrent development. Consider a vertical line at time represented with the arrow in the graph. At that moment there are five small pieces of requirement under work, and each of these are under a different development stage. The team is working concurrently.

Like this topic? check out this book: Optimizing the flow; process improvements for high performing agile teams

The modern history of workflow can be traced to Frederick Taylor. At the end of the 19th century, he...

Agile Culture
the core thing that stuck was the people

the core thing that stuck was the people

Another amazing colleague moves on to a new challenge. Yesterday I did receive this beautiful email. I did not...

Agile Culture
What is a system?

What is a system?

A system is an arrangement of parts within the system’s boundaries which interact with each other, cooperating in a...